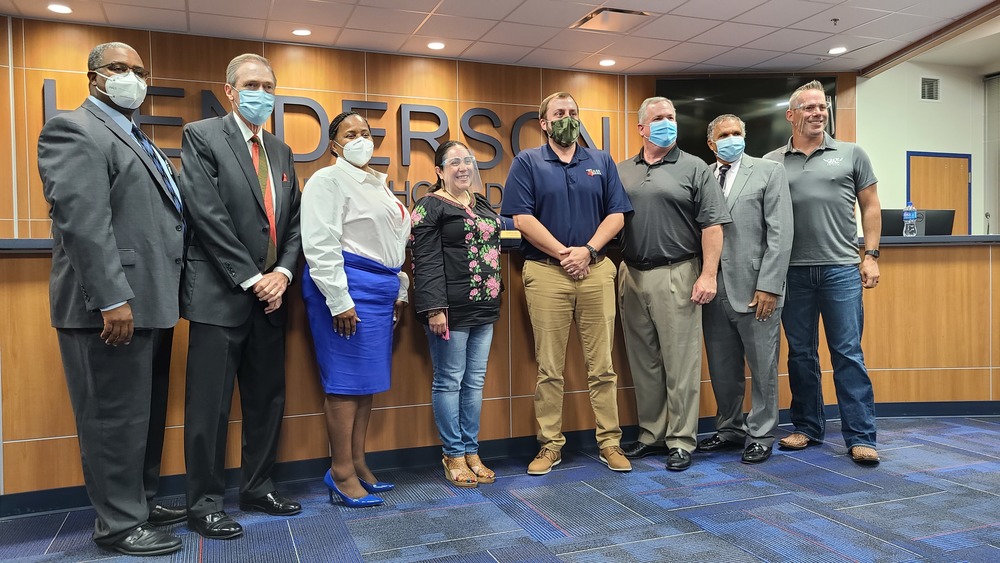 New trustee joins the board.

“I am so honored to serve the district,” said Murillo. “There’s so many great people in our community that are deserving. I just hope I can do something, that this can be a small step that can help the community and make things better.”

Martinez-Murillo is not new to the area or the school district. A 1998 graduate of Henderson High School, she first came to Henderson from Mexico with her mother when she was young. Hers was one of only a few Hispanic families in the area at the time, said Murillo. She learned English quickly and soon became a translator not just for her family but for neighbors as well.

“People would come to our home and ask me to translate for them. I helped them at the doctor’s office, at school and even when buying a house. I was taught to be a helping person.”

At 16 years old, she became a U.S. citizen and later she worked as a paraprofessional at Northside Intermediate School. It is there, working with then teacher Caressa Roberts, that she first thought about continuing her education.

“She motivated me to go to college,” said Martinez-Murillo. “Before that, I didn’t think I had the opportunity.”

“We had those conversations every day,” recalled Roberts who now is officially “Dr. Caressa Roberts” and serves an Assistant Principal at the high school. “I told her she should never stop learning and improving herself.”

Three year ago, she married Joseluis Martinez. Now they have a blended family of five children and together they run their own business, M&M Painting and Carpentry. She serves as a Henderson Area Chamber of Commerce Ambassador and earlier this year was named the Louise Jacks “Young Woman of the Year” for her extensive community service.

Murillo says she hopes her Hispanic heritage can be of benefit to the district.

“The [Henderson School] district has been great,” remarked Murillo. “But one of the biggest reasons I felt moved to apply for this seat is my belief that there is still just a big gap in terms of connecting with the Hispanic community.”

Murillo noted that over the later 30 years, the number of families from Mexico, El Salvador, Honduras and Guatemala has steadily increased. Currently, more than 32% of HISD students are Hispanic/Latino and the district is constantly looking for better ways to bridge the cultural divide so that all students can receive the highest quality of education possible.

“When I was young, people trusted me with helping them in important situations,” said Murillo. “Trust is so important. And I hope to earn their trust in this new position as a Henderson ISD Trustee.”