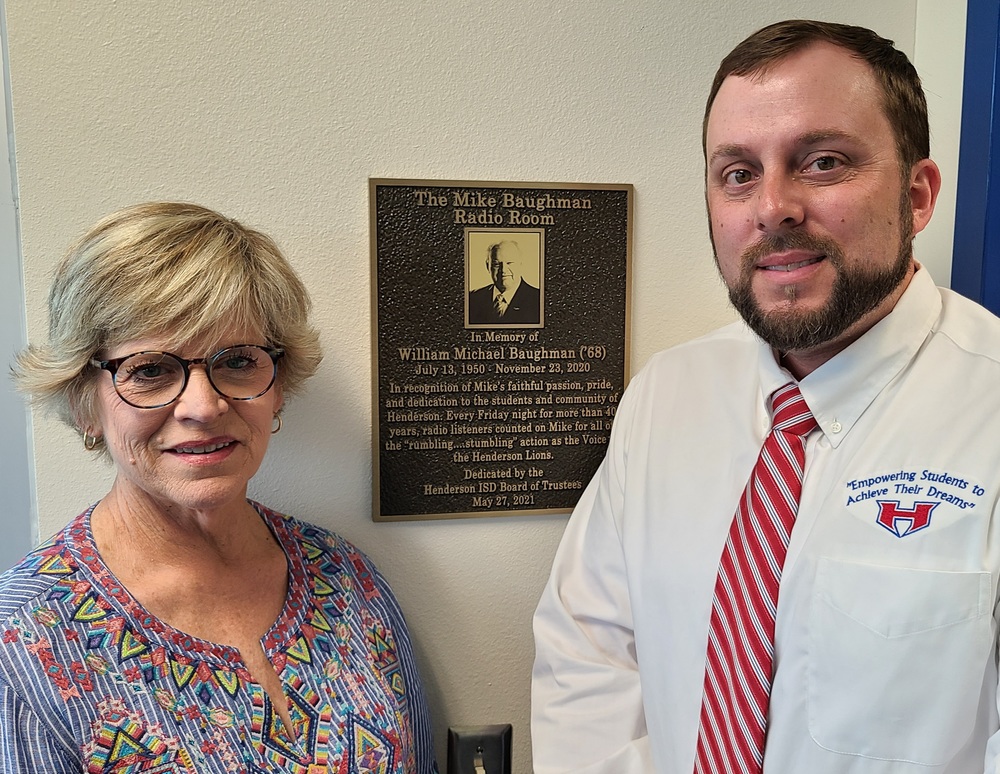 Henderson ISD has honored long-time sportscaster Mike Baughman who passed away last November after serving more than 40 years as the “Voice of the Henderson Lions.” The district formerly named the home radio broadcast booth in the stadium’s press box after him. Baughman’s wife, Beverly, along with family and friends were on hand for the private ceremony held last week shortly before graduation.

“There was no one more committed to Henderson than Mike,” said HISD Board of Trustees Chairman Drew Butler. “He loved Henderson and he loved Lions football. It is such a privilege to be able to honor him in this way.”

During the event, Butler and district representatives unveiled a large bronze plaque bearing Baughman’s picture and the story of how he never missed a broadcast in more than 40 years.

“We thank his family--especially his wife Beverly--for sharing him with us each week,” said David Chenault, HISD’s director of communication. Chenault worked with Baughman a decade ago at KWRD, Henderson’s local radio station. “I especially remember the night he called the championship game from the broadcast booth at Cowboy Stadium. He was definitely in his element.”

“He told me when we got married,” recalled Beverly Baughman with a smile, “that Thursdays and Fridays, he was going to be gone!”

Baughman, a 1968 Henderson High School graduate, was remembered as a “walking encyclopedia of Henderson sports knowledge.”

“It’s fitting that Mike has a permanent place in the Henderson Lion tradition and become part of the HISD legacy,” said Chenault.

Beverly Baughman was also presented with a copy of Texas Senate Resolution No. 441, authored by Senator Bryan Hughes, honoring Baughman for his commitment to the community.